Walk A Mile in Our Shoes:
The ELM Shoes Story

ELM Shoes initially began as a result of one man's innovative attempt to survive a crisis. After losing a contract to bus school children in 1930, J. Ira Eshleman and his sons-in-law, David Lehman and Norman Martin, turned the buses into "stores on wheels.”

In February of 1941, they acquired the building known at that time as the iconic D. F. Ryder building in Greencastle, PA, and opened a retail establishment. The business included groceries, hardware, dry goods, clothing and a tailor. In 1957 the dream of having a separate "shoe department" was formed by Norman's oldest son, Lester Martin.

With a focus on growth for the future, Lester and his sons Lowell and Loren renovated the building in 1983. The expansion allowed them to carry a complete line of footwear.

As a result of another expansion and renovation in 1997, ELM Shoes now occupies over 6,000 sq. feet of floor space and warehouses an impressive 18,000 pair of shoes. The company is now a fourth generation family-owned business that is solely operated by Loren Martin. As the next generation of ELM Shoes steps in, the passion for helping people put their best foot forward continues, and the desire to expand the business beyond Greencastle is on the horizon. 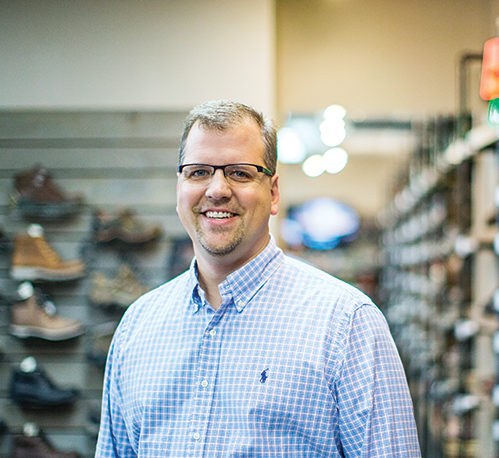 MEET THE SOLE OF ELM SHOES

A Board Member of the National Shoe Retailer’s Association and someone who grew up in the footwear industry, Loren Martin understands the importance of a quality pair of shoes. After 30 years at ELM Shoes, President and Owner Loren finds magic in curating the product line and helping clients find the right fit. Seeing a customer’s reaction to what he has selected - the good, the bad, the head over heel experiences – and learning from his mistakes and successes have turned the small business with big brands into a huge appeal within his community.

Loren spends time educating both his staff and consumers on foot health awareness, brand benefits and the most advantageous product choices for individual lifestyles. (An avid watersport man, Loren should consider investing in Boat Shoes as he spends a considerable amount of time in and out of the water during the summer season.) Loren wants to ensure everyone has a wow experience when they leave ELM Shoes.

A Certified Red Wing Product and Fit Specialist, Gavin Martin takes finding his customers their perfect fit and style very seriously. Being part of the journey and the store that can discover the shoe that meets their need while matching their personality brings him great happiness. Son of Loren Martin and future owner of ELM Shoes, Gavin sees every customer as his future. While he may have thought of side stepping into other career paths, working in the retail industry and pursuing his entrepreneurial spirit - something he’s been developing for over three years now - has caught and held his permanent attention. While Gavin carries the official title of a second-degree black belt in Tae Kwon Do and thrives outdoors in the area’s rural setting, enabling him to hike, hunt and fish, it’s his position and the people at ELM Shoes that fulfill him most. Moreover, seeing satisfied customers and knowing they had a positive experience.